The Hof Van Wouw was founded in 1647 through Cornelia van Wouw as an almshouse for single women. Ever since the founders death  The Hof is  managed through a foundation which is governed through a board of trustees. These trustees, who are direct descendants of the founderess, are testamentary bound for the upkeep of The Hof. They are connected to The Hof as volunteers.

A caretaker and his wife, appointed by the trustees, takes care of the everyday running of The Hof. The so called “binnenmoeder” – the housemother or the matron- takes care of the wellbeing of the residents while the caretaker looks after the upkeep of the houses and garden. His task is also to take residents to hospital if necessary and to organize the voluntary workforce.

Many volunteers look after the Garden of the Hesperides, give guided tours and look after the PR side of The Hof van Wouw. The Hof has a special PR and garden committee.

The PR committee takes care of the printed materials and the website, organizes public events, keeps up the contact with the media and keeps the mailing lists up to date. The garden committee looks after the planting, harvesting  and  upkeep of the many fruit trees, the forgotten herbs and vegetables and gives support to new, green fingered volunteers. 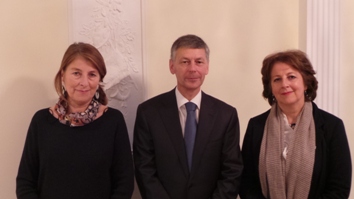 The board of trustees