The 14 residents of The Hof van Wouw are all female, single, aged 50+ and have no pets.

A resident caretaker couple takes care of the everyday wellbeing and needs of the residents. They support the residents in case of illness etc. and the caretakerâ€™s wife is known by the special title of â€śbinnenmoederâ€ť, the housemother or matron

If one of the houses comes vacant the board of trustees in cooperation with the caretaker looks for a new resident. Several interviews take place between  the future resident and the board. During these interviews the rules and regulations of the Hof are explained.

When it is a residentâ€™s birthday the flag of The Hof van Wouw with the court of arms of Cornelia van Wouw is raised. At New Year there is a traditional celebration for the residents. This takes place in The Tuinkamer â€“ the Garden Room â€“ which is situated behind The Garden of the Hesperides. The caretaker and his wife and all the residents receive also a Christmas present. Once a year there is a dinner for everyone in remembrance of the founderâ€™s birthday which  was in January. Nowadays it is usually a BBQ in the summer.

If you want your name on the waiting list of future residents please fill in the form. The following conditions apply: 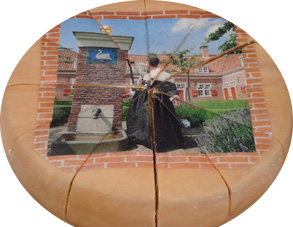