The Hof van Wouw is located in the centre of The Hague on the west side of the Lange Beestenmarkt (numbers 49 – 85). These Almshouses were founded in 1647 by Cornelia van Wouw for the purpose of providing accommodation for single women.  The residents are still chosen by the rules laid down in the will of the founder.

There have been two major restorations of the Hof which took place between 1955 and 1960 and between 1989 and 1997 making them the most attractive and authentic almshouses in the city.

The complex of 17 houses includes one for the Trustee and one for the Administrator.  These latter two houses stand on either side of the entrance gate from the Lange Beestenmarkt and were brought back to their original state during the second restoration as was the gate itself.

From the outside the houses appear largely as they would have done in the 17th century. Inside there have been a lot of changes including modern sanitation from 1904, when the houses were connected to the municipal sewers and toilets annexes were built. (Previously two huts in the garden had served as toilet facilities.) In the 1950’s the annexes were taken down and toilet facilities were built inside. The current storage space in the houses was made from the former turf store. The space previously taken up by the box-bed has been utilised to make a small kitchen, and a bedroom and bathroom have been added in the attic. By 2002 the dwellings consisted of a living room, kitchenette and toilet on the ground floor and a bedroom and bathroom on the upper storey. 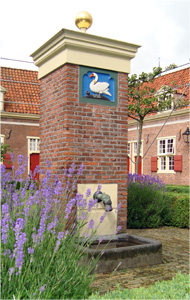