Cornelia van Wouw was a single child from an aristocratic family in the Hague. Her Grandfather was a Mayor of the city and many family members occupied various government positions. After her death Cornelia left her entire fortune to the Almshouse. Out of the legacy the buildings had to be established and maintained and residents given a small payment.

By her will Cornelia stipulated that the children of her brothers and sister and their progeny were to govern the Hof and this is still honoured.  The Board of Governors is formed by two female and one male who are accompanied by two supervisory trustees one of whom is the solicitor for the Foundation.

For the establishment of the Hof Cornelia there is a famous old legend:

In this painting of Cornelia van Wouw the Almshouse appears behind her. She is shown in a writing position and the oral tradition is that  she wrote about educational subjects perhaps inspired by her familiarity with the lives of her nieces and cousins. However, no books by her have been found. 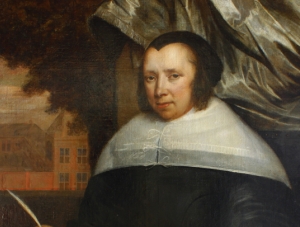